Tosebo. I was there in 1961. I have heard that, of all people, Orson Wells was a Tosebo Camper (well before my time there...)! Myth?

Tosebo Campers Listing -- Where Are You NOW?

General Information About The Old Camp

Nestled in 56 acres of woods on the south shore of Portage Lake, the Old Camp Tosebo Inn - Bed and Breakfast - offers its guests the best in indoor comfort and outdoor pleasures in a romantic and historical setting. For over half a century, Tosebo thrived as the summer home for the Todd Seminary for Boys, hence the name To-Se-Bo.

Founded by Noble Hill, the Todd School was a progressive institution that nurtured many bright young men, the most celebrated being Orson Welles, who attended the camp during the early 1930's. Camp Tosebo was established in 1912 by Mr. Noble Hill who was at that time Headmaster of Todd School for Boys in Woodstock, lllinois. From the old name of the school, Todd Seminary for Boys, was adopted the name TOSEBO.

Tosebo's Owner-Director Hal Tonkins, and his wife Jane lived at camp in their cottage next to the Clubhouse. Hal, who held his Masters Degree in Education from Wayne State University, spent his winters teaching Health and Physical Education. The Tonkins brought to Tosebo many experiences gained through several years of private camping in Michigan and Arizona. Because they felt it so important to treat each boy as an individual, the keynote of all program and activities has always been the development of the individual camper's own character and personality.

In summer at Camp Tosebo you would travel by canoe as the Indians once did down the same shimmering streams and rivers through peaceful meadows and game filled forests. You would pitch your tent, cook over an open fire, and then sleep under the star studded heavens. You would feel the thrill of silently gliding over rippling water beneath glistening white salls, pushed along by the invisible hand of God. You would run at the crack of the bat or the sound of the starter's pistol.

You would learn that winning is fun, but that whether winning or losing the most satisfaction comes from playing hard and fairly and being a good sport. You would experience the give and take in life, but you would find that the joy is in the giving. At camp as in life, you got out of it just what you put into it. Tosebo offered you great opportunity and inspiration. You did return home at the end of the season a little stronger, a little wiser, a little happier, and a little farther along the road toward manhood.

Awards at Camp Tosebo were based on "honors " which were earned on the basis of good citizenship and achievements in the various camp activities. When you had earned 25 honors you win a Camp Tosebo letter "T" that you may had sewn on your jacket. For each additional 25 honors that you earn you received another award. After you had earned 100 honors you received a beautiful Camp Tosebo shield. Then it was possible to win "bars" in the various activities and mount them on your shield to show your achievements. The awards were given out each season at a special awards banquet. At Tosebo some of the boys lived in tents and some lived in cabins.

If you were 11 or under you would probably be in a cabin or if you are 12 or older you would be in a tent. Cabins had five or six boys and a counselor while tents had either four boys or three boys and a counselor. Indoor flush toilets were located near the tents and cabins. For the activities involving competition the camp was divided into two tribes, the Blackfeet and the Chippewas. Some of the feature events of the season included the regular games of the "major" and "minor" leagues, tournaments in tennis, track, archery, BB's, and Tom Thumb Golf.

You had daily swimming lessons under the supervision of Red Cross Water Safety Instructors. At Tosebo your ship would come in and you'd be captain. Your ship might have been only a plastic "saucer" but then it might have been a rowboat or canoe or sailboat. You did find counselors on hand ready to give you instructions in boat handling, water safety, and seamanship. Tosebo's fleet of about 20 boats could easily float at the entire camp at once.

The Clubhouse at Tosebo contained the most important rooms at camp - the kitchen and dining room. The food at Tosebo was good and wholesome. You could be sure that when you came in after a morning or afternoon of vigorous activity you would be able to put plenty of it away. The food was served family style by the counselor to the five boys sitting at his table. Each week you would sit at a different table with different boys and a different counselor. Twice a week you did eat a picnic supper up at the picnic grounds on the "hill" near the tents and cabins.

The clubhouse had a cheerful infirmary where you could go and have the camp nurse take care of any bruises or illness that might come your way. The clubhouse also housed the library and game room where you could play or sit inside by the fire and read stories on rainy days. Tosebo had its own horses stabled right at camp and if you were interested in riding you will be able to ride almost every day. More than that, you did learn how to care for the horses. As you gained more experience you have been able to ride out through Tosebo's miles of beautiful trails.

You were given an Indian name at Tosebo and you participated in traditional Indian council programs. When the Medicine Man gave four beats on the tom-tom you would file past the Totem Pole into the council ring for an exciting evening of Indian dances and Indian Legends as the licks of flame from the fire and torches cast dancing shadows against the surrounding woods and hills. A climax of the season was the Indian Pow Pow with games and hunts and feasting and ceremonies.

Today, long after the last campers have gone, Tosebo Inn retains their memories with camp photos on the walls and the camp credo, " There is nothing so kingly as kindness ", painted on the large stone fireplace. The main lodge was originally built in 1893 as a dance pavilion for the cottagers in nearby Red Park. In 1912 a second story was added when it became known as " The Clubhouse " for the camp. The architecture is a unique combination of carpenter gothic and arts and crafts.

In the 1996 renovation the details of the house were carefully restored and as a result the entire camp was listed on the Michigan State Register of Historic Sites. The Inn now boasts eight guest rooms along with several sitting areas including a large living room, a library, a game room, a dining hall and two sitting porches, all lovingly decorated with camp furnishings. Comfort, privacy, relaxation and wide open spaces both inside and out, are what make Tosebo a unique B&B.

In order to assure the comfort of the guests, each of the quiet guest rooms is furnished with a pillow top bed, dressed in high quality cotton linens and covered in a fluffy duvet, providing a luxuriously comfortable nights sleep. To encourage guests to relax each of the five private bathrooms has a claw foot tub and the guest rooms without private baths share two bathrooms, one of which also has a tub and both are equipped with showers. Those guests who prefer to take a shower may do so in one of the shared bathrooms in the hall.

In the morning, guests will awake to the warm sweet smell of freshly baked goods and hot coffee beckoning them downstairs, well-rested to a delicious home-cooked breakfast. For those guests on low-fat or special diets there are options available on request. After breakfast, guests may wish to spend their time enjoying the many recreational and relaxing activities available in the area. Outside the clubhouse there is an informal garden and Portage Lake is just a short walk down the road.

The camp's old boat house sits on a private beach where guests can take a refreshing dip or enjoy a book while sun-bathing. Portage Lake is also great for fishing or boating and has a channel that leads into Lake Michigan. Bicycling around the lake, hiking in the woods, canoeing, skiing or playing tennis are just some of the possibilities for fun. There is a canoe, a row boat, tennis rackets and a bicycle built for two available for guests to use.

There are also cross country ski trails throughout the woods. In the summer, campfires are a regular evening affair, and in the fall the Tosebo woods are brimming with color. The nearby town of Manistee has a wonderful historic downtown district with restaurants, antique shops and a restored turn-of-the-century theater. Guests may wish to ride the Historic trolley tour or stroll along the recently completed river walk. 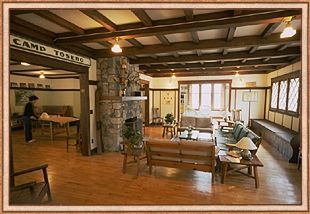 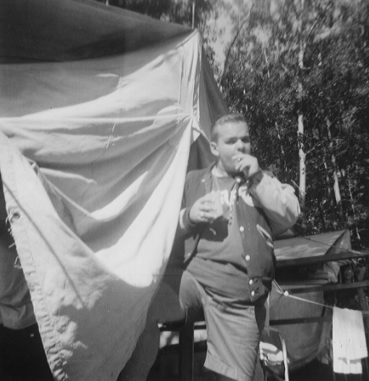 One of my counselors (above) 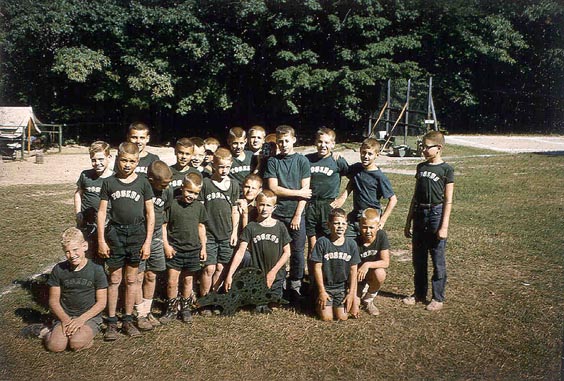 Courtesy of Steve Buckingham (above)

The below are 'historic' photos 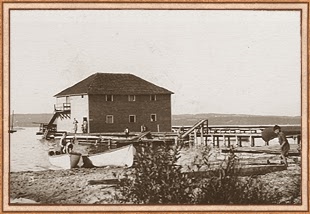 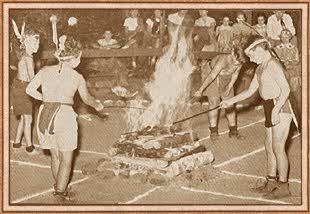 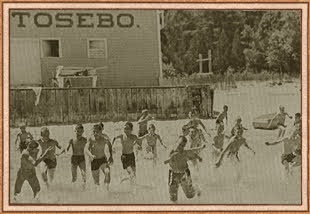 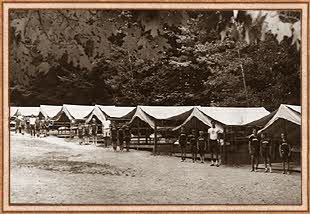 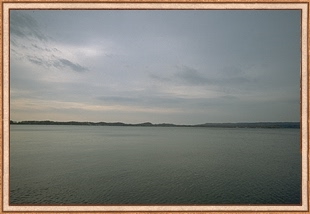